Posted by gilbert grace at 6:40 PM No comments:

Email ThisBlogThis!Share to TwitterShare to FacebookShare to Pinterest
Labels: music 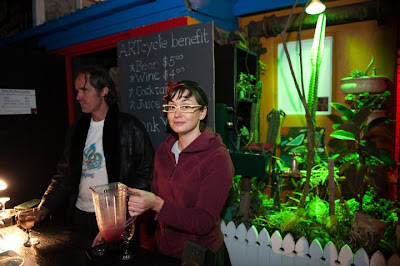 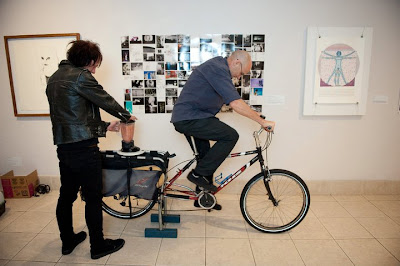 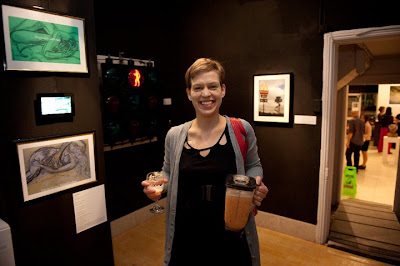 Great night was had by all at the ARTcycle Launch. Special thanks to 'Pedro' Pete McGuinness for manning the bar. Pedro TV is an ARTcycle supporter from wayyyy back, well since the inaugural ARTcycle collaboration between BIKESydney, MASSBUG and ATVP in February of 2010. Thanks Pete. Special thanks to Cheeky Transport for providing the Blender 'Bender' Cycle and the give away goodies. Thanks to Connie for the Cosmonaughts. More photos on Georgie Pollards Facebook page. Thanks and cheers to all who made it a memorable night.

Posted by gilbert grace at 3:49 PM No comments:

Email ThisBlogThis!Share to TwitterShare to FacebookShare to Pinterest
Labels: party

Email ThisBlogThis!Share to TwitterShare to FacebookShare to Pinterest
Labels: party

Much ado about nothing


"THE Sydney artist Rodney Pople's Archibald entry, Artist and Family (after Caravaggio), depicts the artist being beheaded by his wife, curator Felicity Fenner, while his two shirtless sons look on.

A tribute to the Italian master's famous work Judith Beheading Holofernes, it is also a sly reference to the attacks on Pople's work by church groups in 2010 and to the hysteria surrounding Bill Henson's photographs of adolescents in 2008.

Yet the painting, a 2011 Archibald finalist, is exactly the sort of work that seems destined to fall foul of a classification system that has been recommended to a Senate inquiry..."

Offensive content? ... Gentileschi's Judith Slaying Holofernes.
"ARTISTS could be forced to have their work classified before being displayed and some work could be blacklisted despite being legal, if recommendations to a federal inquiry into Australia's film and literature classification scheme are accepted.
The Senate inquiry, launched by the conservative Christian Guy Barnett, has heard submissions calling for any film containing full frontal nudity to be refused classification; artworks and books showing nudity to be classified; and all artworks to be restricted to certain age groups. ''Artistic merit'' should be abandoned when classifying art.
The executive director of the National Association for the Visual Arts, Tamara Winikoff, said many of the organisations that had made submissions to or spoken at the inquiry's hearings, and members of the inquiry, had tried to demonise artists and paint them as child pornographers.

Full-frontal nudity ... how would Michelangelo's David be classified?
''We are particularly worried that artists might have to have all their work classified immediately, regardless of the material,'' she said. ''There is a sense [in the inquiry] that art is dangerous.''
Senator Barnett, who chairs the inquiry, is a critic of the photographer Bill Henson, whose photograph of a naked 12-year-old girl sparked a ferocious debate in 2008. He questioned many of those appearing at the hearings about the Henson photographs...
''It would create a huge hurdle for artists and it would create a chilling effect. We have already seen it with [the depiction of children in artworks]. Artists just don't want to be there … there has been pressure taken over fairly innocuous work,'' she said, referring to the collapse of a charity auction for the Sydney Children's Hospital because hospital officials did not approve of a photograph of a six-year-old boy naked from the waist up..."
http://www.smh.com.au/entertainment/art-and-design/warning-this-art-debate-may-contain-adult-themes-20110417-1djv8.html#ixzz1JoysyPNu
accessed Monday 18 April 2011
Posted by gilbert grace at 8:22 AM 9 comments:

Email ThisBlogThis!Share to TwitterShare to FacebookShare to Pinterest
Labels: censorship


"THE driver and accountant of detained artist Ai Weiwei have gone missing, according to assistants from his studio.

Friends of Zhang Jingsong, known to friends as Xiao Pang, and accountant Ms Hu - who worked for Ai's art and architecture practice Fake Design, and whose full name is not known - have been unable to contact them since the weekend.

Officials said last week that police were investigating Ai in connection with suspected ''economic crimes'', but the artist's family say they have yet to be notified of his detention.

Mr Zhang, 53, has been out of contact since he was stopped by officials at Beijing airport more than a week ago. His friend Wen Tao, 38, has also been missing since police reportedly detained him on the same day. Police did not respond to faxed queries about them.
The detentions come amid a broadening crackdown in China, which has resulted in dozens of dissidents and high-profile human rights lawyers being detained or going missing. On Sunday, police rounded up about 160 Christians attempting to hold an open-air service in Beijing, having been evicted from their previous home. Most were released not long afterwards...
Meanwhile, English-language state media continued to attack Ai at the weekend, publishing a lengthy piece claiming many in China regarded his work as ''third-rate''. Although he is not a household name in China, he is the country's best-known artist internationally and co-designed the Bird's Nest National Stadium, the centrepiece of the Beijing Olympics.

The Xinhua article quoted claims that his 2007 work Fairytale - for which he flew 1001 Chinese citizens to an art show in Germany - was stolen from the idea of Professor Yue Luqing. But Professor Yue said he had ''strong sympathy'' for Ai, was worried about him and questioned the relevance of the claims. ''I hope he is safe, no matter where he is now. I know that he has not been in good health. I have been paying attention to what he has been doing during the years, and I identify with him. These are completely different matters,'' he said."

http://www.smh.com.au/world/chinese-artists-two-assistants-missing-during-police-probe-20110412-1dclo.html
accessed Wednesday 13 April 2011
Posted by gilbert grace at 10:06 AM No comments:

I heart the lane


Prospect Park West Family Bike Ride/We Ride the Lanes from Streetfilms on Vimeo.
Posted by gilbert grace at 6:48 AM 1 comment:

A little piece of heaven


People, Parklets, and Pavement to Parks (plus Mojo Bicycle Café) from Streetfilms on Vimeo.

See also:
http://www.rebargroup.org/
Posted by gilbert grace at 8:16 AM No comments:

"ARTBIKES, (commencing January 2011) marries creativity, beauty and sustainability.
ARTBIKES offers free bike access to Hobart's arts precincts and galleries, all the while promoting healthy, climate-friendly transport.
Inspired by bike-sharing services in Paris, Auckland and Melbourne, ARTBIKES allows arts lovers to borrow a bike for free, and cruise the galleries of Hobart. ARTBIKES will also augment the city environment with the installation of six Bike Hubs, designed by Hobart artist Ken Betlehem. As part of the Hobart City Council's Public Art Program, these free-standing pieces of original public art are not only locking posts for bikes not in use, but also act as signposts for public galleries and artist-run initiatives..."
http://www.arts.tas.gov.au/arts@work/artbikes
accessed Sunday 10 Arpel 2011
Posted by gilbert grace at 7:43 AM No comments:

NRMA to copy RACV and sponsor Sydney's BikeShare service - I'd pay to see that!

SPLENDID call out for artists

Calling creatives of all stripes who have an inquisitive mind, an innovative approach and a desire to collaborate to participate in the 2011 Splendid program. Visit our website: www.splendid.org.au
Splendid is seeking the next generation of young and emerging artists to participate in a 3 week intensive residency to dream up ideas and create work for festival audiences.Splendid is open to artists (under 30 years or in the first 5 years of their practice) who work in the visual arts, theatre, dance, design, installation, architecture, digital media, sound, text and other creative pursuits.The Splendid program includes a residential Arts Lab, mentorship and opportunities to make and tour your work to major festivals around the world.
The Arts Lab will take place over 3 weeks in Lismore, NSW and at Splendour in the Grass Woodford, QLD and offers participating artists opportunities to work collaboratively in a dynamic environment that encourages critical thinking and experimentation. Facilitated by leading local and international artists including Fernando Llanos(Mexico - video art), David Clarkson (physical theatre), Natalie Jeremijenko (USA - environmental design), Craig Walsh (site-specific projections), Paul Gazzola (site specific + collaborative practice) Técha Noble, The Kingpins (art direction & performance) and more.
Applications due: 5pm Monday 2 May 2011   Arts Lab: Monday 25 July to Friday 12 August, 2011
Visit our website: www.splendid.org.au to download the guidelines, selection criteria and application form, email info@splendid.org.au or call 02 6622 2209.
Splendid is driven by partner organisations Lismore Regional Gallery and NORPAand supported by Splendour in the Grass. Splendid is an Opportunities for Young and Emerging Artists Initiative (OYEA) assisted by the Australian Government through the Australia Council, its arts funding and advisory body.
Posted by gilbert grace at 10:15 AM No comments:

Get a KickStart to Art

Posted by gilbert grace at 6:50 AM No comments: 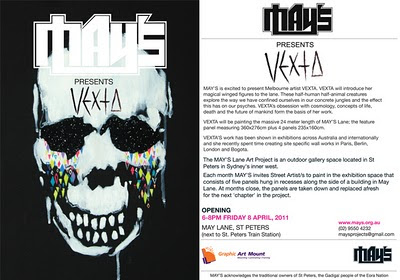 Posted by gilbert grace at 4:42 PM No comments:

Email ThisBlogThis!Share to TwitterShare to FacebookShare to Pinterest
Labels: May Lane

The Silk Cut Award was introduced in 1995 to encourage the making and appreciation of linocut prints. Sponsored by the Silk Cut Foundation Inc in conjunction with Duroloid and Dutch manufacturer Forbo, the award aims to provide creative opportunities for artists of all ages. A unique and vital part of the award is its special category for primary and secondary school students with winners being part of an ongoing gift to the National Gallery of Australia. International entries are welcome and encouraged.

The name Silk Cut reflects the versatile and effortless handling qualities of this natural linoleum product.

The 2010 Grand Prize in the Open section was awarded to artist Bridget Hillebrand for her work Seven-and-twenty lake. Her print will form part of the ongoing gift to the National Gallery of Australia.

Posted by gilbert grace at 8:15 AM No comments:

So it’s time to get your pitch to us. If you have a show you think has legs - existing or new; or an interesting or quirky idea; or a just plain crazy idea, across the range of the performing, digital and visual arts we want to hear about it.

So come on, lead the charge!

Posted by gilbert grace at 8:34 AM No comments:

The City will support a major new arts research project which aims to demonstrate the capacity of the arts to promote and create eco-sustainable urban cultural environments, subject to Council’s agreement of the Cultural and Community Services Committee’s unanimous recommendation on Monday.

Curating the City is a research initiative of the National Institute for Experimental Arts at the College of Fine Arts, UNSW. Researchers and artists examine international case studies of sustainable arts projects to help guide Sydney projects, such as the urban renewal of Green Square. Local communities and artists will also have the opportunity to work with international experts in environmentally sustainable public art.

On Monday, the committee recommended that the City partner the Institute’s application for an Australian Research Council grant to support the project over five years. If the application is successful, the City will contribute cash sponsorship of $20,000 a year over five years. It is exciting that Object: the Australian Centre for Craft and Design and Digital Eskimo are also supporting the project.

Posted by gilbert grace at 8:17 AM No comments:

The theme for the 2011 Ecologically Sustainable Annandale Exhibition is Water in Annandale.

Works need not be for sale, but must be on the theme of Water. Sponsors, Speakers, Performance and Visual Artists interested in participating should contact me.